Unbolting the Doors (to the Past)

Charles Ede is delighted to announce the reopening of its gallery space on June 15th. The occasion will be celebrated by a new exhibition showcasing much of the ancient art due to have been shown at this summer’s Masterpiece Art Fair.

Covering a swath of the ancient Mediterranean world, the exhibition will include sculptures in marble, terracotta and bronze, Roman glass vessels dating from the 1st-5th centuries AD and a selection of Egyptian faience artefacts and amulets.

At the heart of the exhibition is a group of sculptures that focuses on the female form and its representation over nearly three thousand years.

The earliest is a Greek marble figure from the Cyclades dating to c.2600 BC. These enigmatic sculptures, often erroneously referred to as idols, were unknown until their rediscovery in the late 19th century. The severe geometry of their bodies is explained partly through the laborious way in which they were made, the stone being ground away using water and emery. Ours is a fine and, unusually, intact example of the Spedos type, named after the area where these figurines were first unearthed. Their purpose is still unknown and although we most often display them vertically, they seem to have been found in graves, lying horizontally, their toes pointed. Maybe they represent the dead, but certainly are connected with notions of fertility. Almost all these figures depict naked women, some are shown with a distended belly suggesting pregnancy, whilst just a handful are male. It need hardly be said that these figures were a revelation to artists such as Picasso and Brancusi who discovered them in the Louvre; their influence on the School of Paris and later modern art was profound. They provided a fully functioning sculptural aesthetic that had had no influence on pre- or even post-renaissance art. As with most such figures, our example, with her blank face, crossed arms and evident self-containment, rebuffs our questioning eyes, adding to her mystery.

Two terracotta figures, dating to the early 1st millennium BC, come from the Amlash culture on the southern coast of the Caspian Sea. They are as strongly abstract in their forms as the Cycladic, and as inscrutable. Neither culture left written records, so our interpretation can be only conjecture: are they fertility figures or goddesses? As with the marble Cycladic figure they are made of local materials, in this case clay, which was hand-moulded before being sun-baked. The resulting soft, matt surfaces have a tactile affinity with human skin as well as a sense of fragility. Their forms however are remarkable for the exaggeratedly wide hips (emphasising their sexuality) and short conical legs. The breasts, though expressed, barely register; their faces are little more than a jutting protrusion from a smooth, long body and neck. 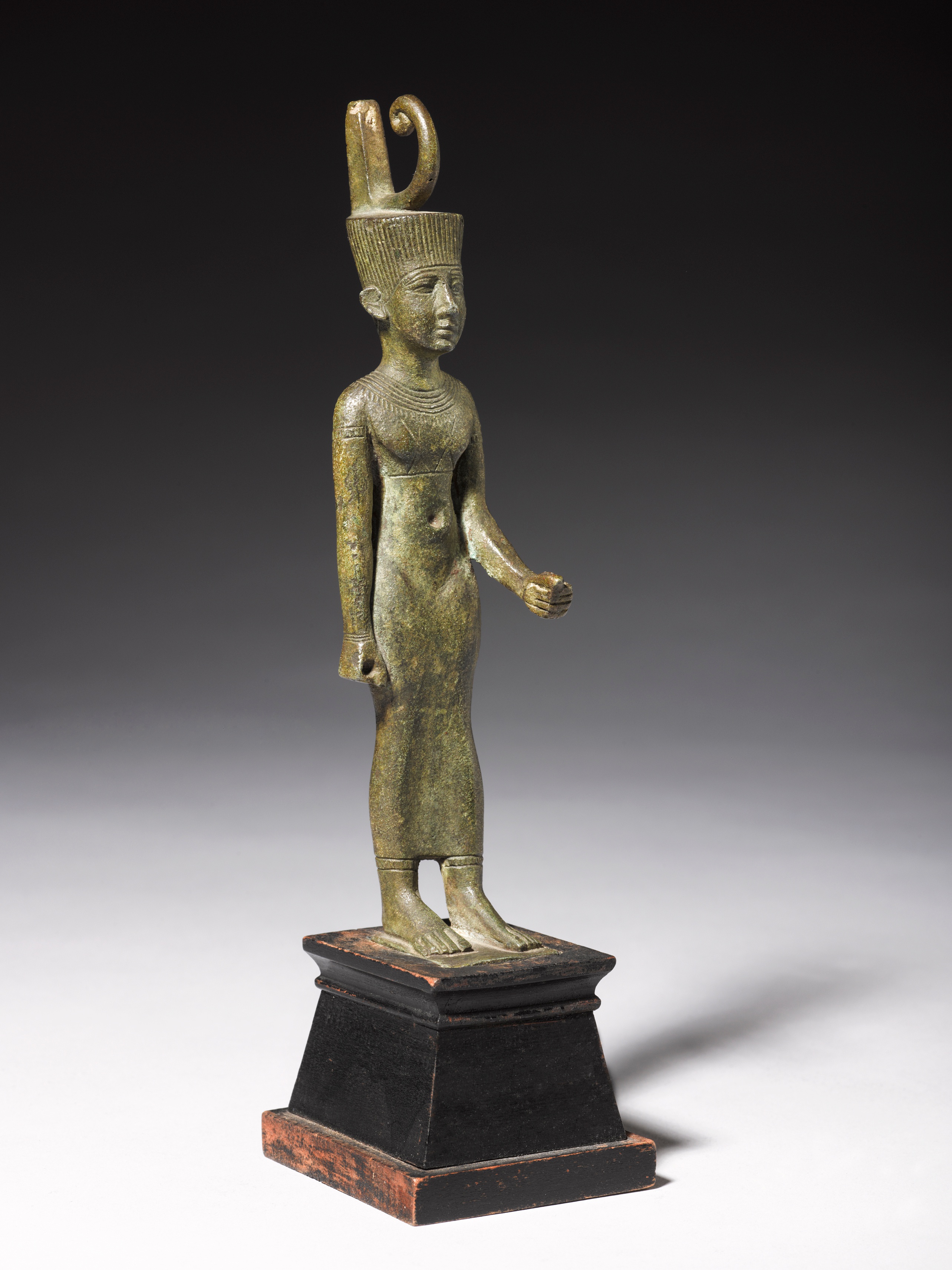 From Egypt comes a bronze statuette of the goddess Neith, dating to the Late Dynastic-Ptolemaic Period, 664-30 BC. Her slender form, narrow-hipped, small-breasted and with a flat-stomach, hints at none of the earlier indications of sexuality. She is the divine expressed in human form, actively striding into our world, and unlike the earlier examples is depicted clothed, wearing a fine, close-fitting, almost sheer dress down to her ankles. Here we are more certain of meaning as the Egyptians left copious writings. Neith, for all her apparent serenity, was a warrior goddess.

Despite the soft, elegant modelling of her body Neith preserves an almost schematic, rather rigid, stance. It was the Greeks in the early 5th century BC who revolutionised the way in which the human form was sculpted and perceived. Their startling innovation was to break free of symmetry. By throwing-out the hips to one side they created a series of s-shaped lines running through the sculpture and the representational became naturalistic. 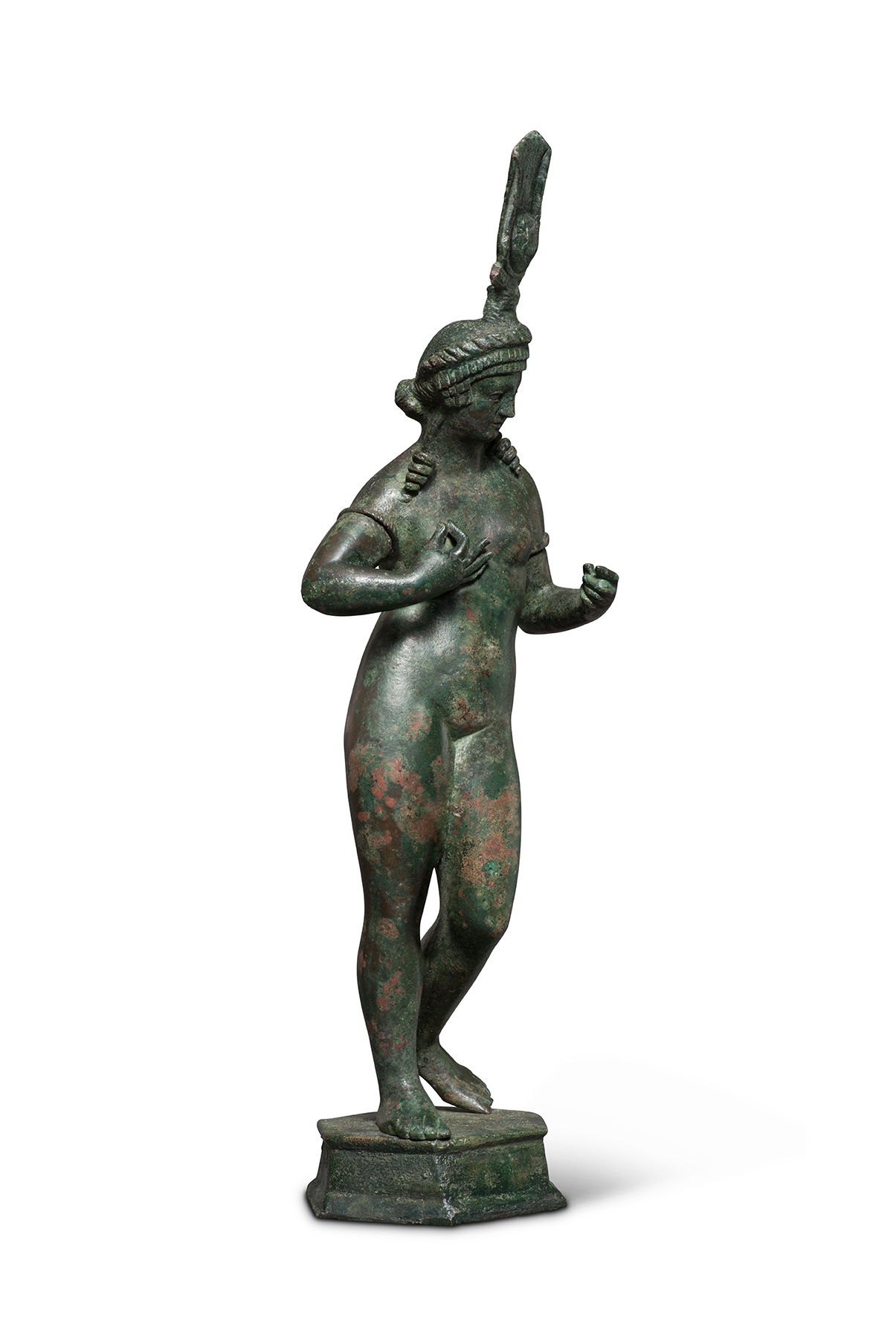 This is clearly shown in the impressive Roman bronze statuette of Isis-Aphrodite. Here we see the Egyptian, Greek and Roman worlds compressed together in a single syncretic deity. Isis, the great Egyptian mother goddess, merges with a sensuous Aphrodite, whose iconography was in turn borrowed by the Romans for their own Venus. Egypt is expressed by the feathered plumes of the crown, the only apparel, apart from armbands, worn by the otherwise naked goddess.

Our marble torso of Venus is also from the Roman period, though after a Greek original of Aphrodite. A sizeable fragment, the body is clearly shown in a swivelling movement as the goddess, startled by our presence, attempts to cover her nudity. The arms, which originally tried to deflect our gaze and hide her vulnerability, have broken away and we now see her unshielded. Walking around, her twisting form offers-up a series of different views, and although divine, her specific humanness is completely revealed: the dimples in her hips; the small depressions at the base of her spine which curves sinuously down her back; the slight wrinkles to her belly. It is no coincidence that the goddess of love is shown unclothed, in her splendid beauty she is supposed to excite erotic desire.

The antithesis of the revealed body is seen in the Roman marble statuette of a goddess or muse. Contrapposto is still clearly invoked, but there’s not an inch of bodily flesh evident, and although the body is fully clothed, hidden beneath drapery, it is paradoxically revealed by the way her himation is pulled across the hips and body in diagonal ripples, and by the left knee breaking through the column of folds of her finely woven chiton. The serpentine lines of her outer garment, which falls over her left shoulder and under her right arm, divides and exposes the form of her breasts.

Because of social distancing measures, visits must be arranged in advance. We look forward to welcoming visitors to the gallery for a coffee, tea, or even a glass of something cold and sparkling.