Egyptian fragment of a statuette of a vizier 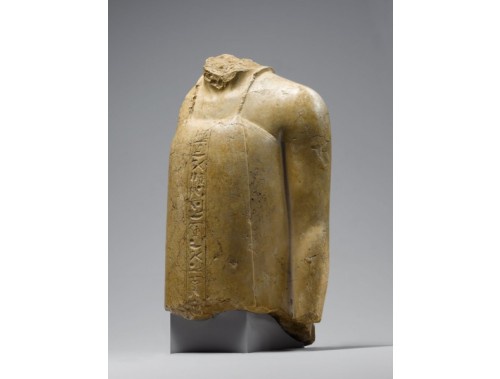 Sold to the Metropolitan Museum, New York, in 2007, this exceedingly rare statuette is one of the very few sculptures of non-royal highly important individuals to have survived from the Amarna period and is the only known statue of a vizier from Akhenaten's reign. The front of his costume and the back pillar have columns of delicately carved hieroglyphs. These consist of two versions of prayers to the pharaoh Akhenaten in which the King is addressed as the incarnation of the sole god, Aten. The front reads 'Praise to your Ka, my perfect sun, may you shine for me every day, O Waenre, who creates...' The back reads 'Praise to your Ka, O Waenre, the one by the beholding of whom one lives. May you give strength while I live seeing you. Waenre 'The Only One of Re', is none other than Akhenaten himself. The identity of the Vizier is tantalising; the most likely candidate is Nakht, also known as Nakht-pa-Aten, who had a house in Amarna and who had also begun the construction of a rock tomb there (No.12), which, however, did not get beyond the carving of the façade and the beginning of the first room. Theoretically, but less likely, it could also be a vizier from Memphis, or even the Theban vizier Ramose (of TT 55) from the very beginning of Akhenaten's reign.