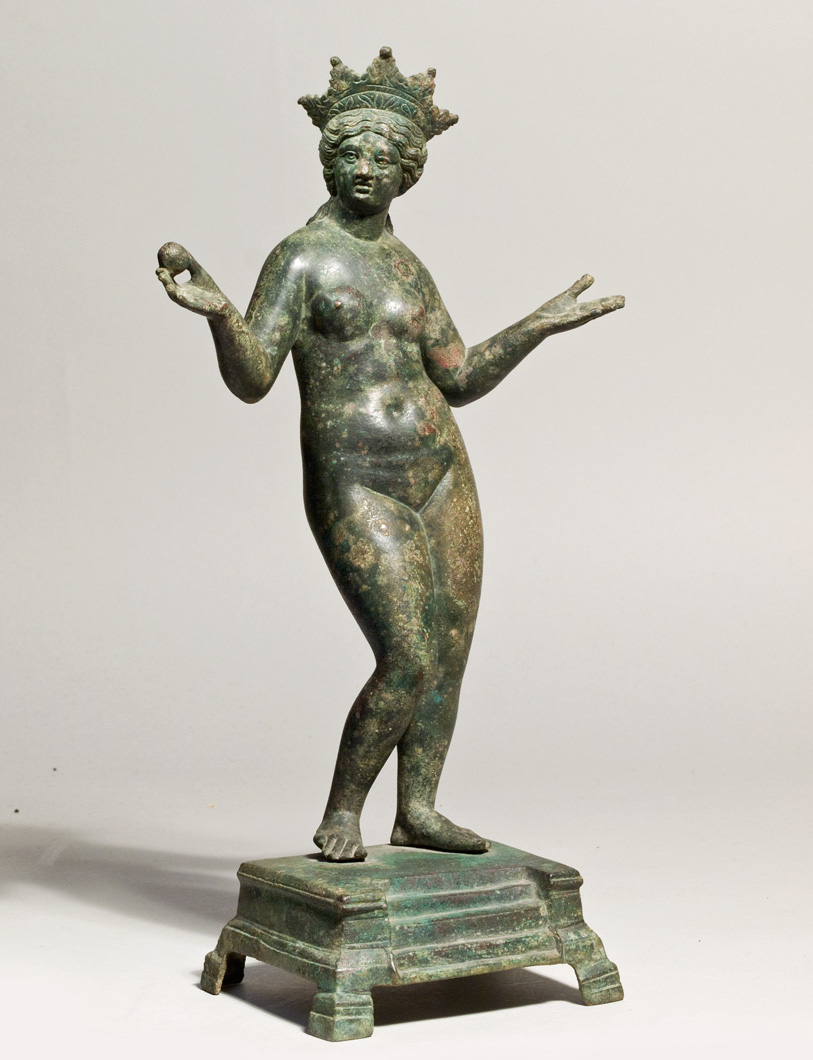 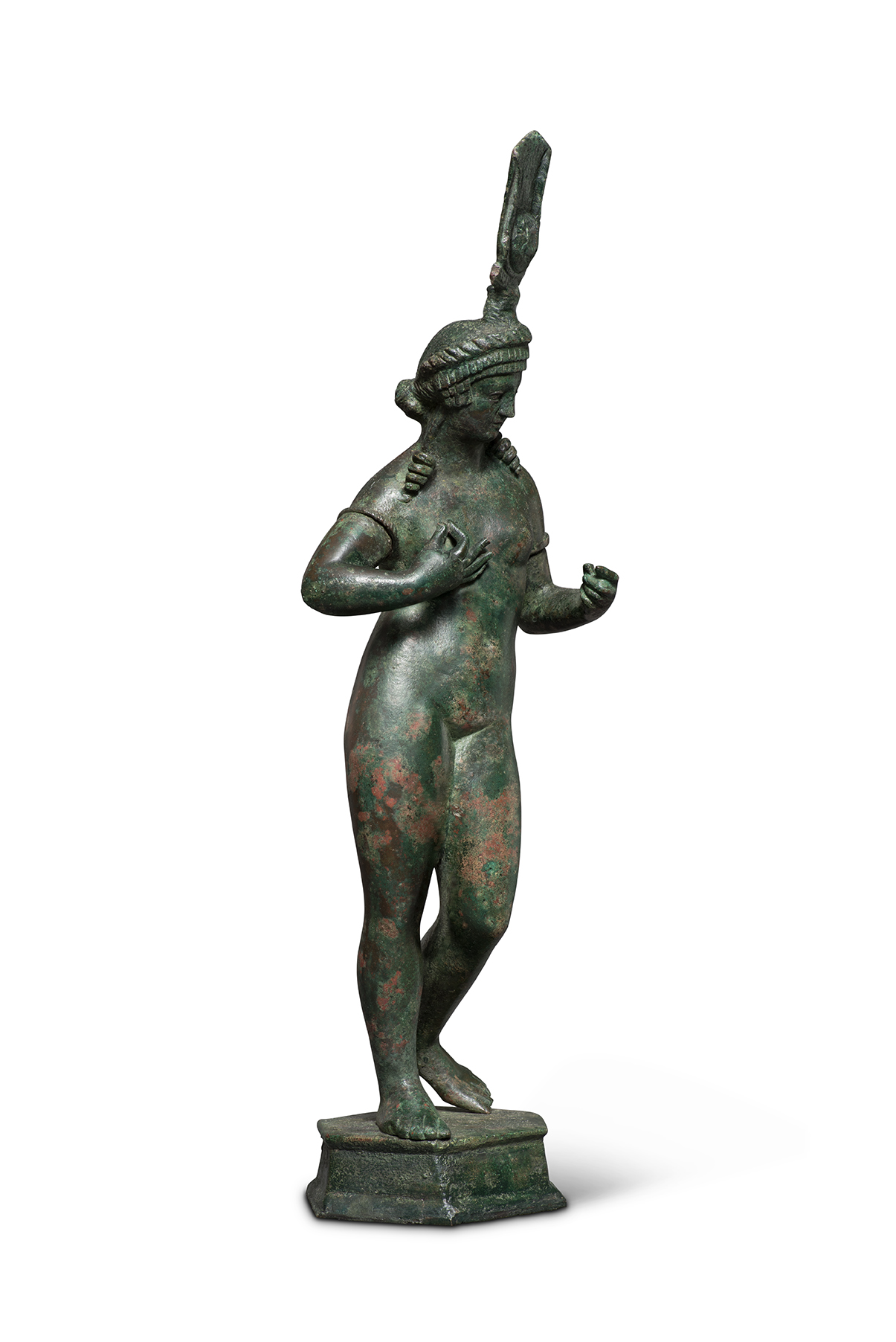 The Roman bronze statuettes of Venus shown above come from the same renowned de Clercq Collection, but depict the goddess in two different manifestations.

The first of the two was sold by us to San Antonio Museum of Art, USA, in 2013. It shows the nude goddess wearing a radiate diadem, her right hand holding forth the golden apple given her by Paris for winning the beauty contest at the wedding of Thetis and Peleus.

The second statuette, currently residing at the gallery, shows the goddess of love, again undressed, but this time wearing the tall crown of Isis, with incised sun-disc showing a rearing cobra, the two elongated cow horns supported by a couple of feathers, and two plumes sticking out at right angles from the base of the crown. As your gaze flows downwards one notices the exotic armlets she wears, and the seductive gesture she performs with her right hand. She stands coquettishly, her right hip jutting outwards as she raises her pointed toe off the ground.
Her hair is tied in a bun at the nape of her neck, with two tightly coiled locks elegantly falling over the shoulders. The hair's arrangement is strongly reminiscent of the wigs worn by divinities and royals in ancient Egypt. Combined with the crown this denotes the statuette as being an image of the syncretic goddess Isis-Aphrodite; a combination of the Egyptian and Greek counterparts.

Louis de Clercq (1836-1901), to whom both of these statuettes once belonged, had fallen in love with travel, archeology and ancient cultures early on in life. In 1859, at the age of 23, having yet to settle down in any meaningful employment, and with no prospects beyond living off the family fortune, he was encouraged to become a military courier for Napoleon III. De Clercq was sent to Syria and Egypt to photograph the archaeological and cultural sites, an trip that ispired him so greatly he changed as if overnight, and became the most ardent of photographers in recording these exhilarating travels and the landscapes through which he ventured. In 1861 he self-funded the publishing of some 222 images in six volumes, the fifth of which was entitled Monuments and picturesque sites in Egypt. With his love of the eastern Mediterranean and northern Africa came the beginnings of probably the largest collection of Roman bronze statuettes of Venus in modern times. Charles Ede have had four of these bronzes over the years, though the current one far outshines the others.

It is with us now but it could be yours, after all, museum quality isn't just for museums... 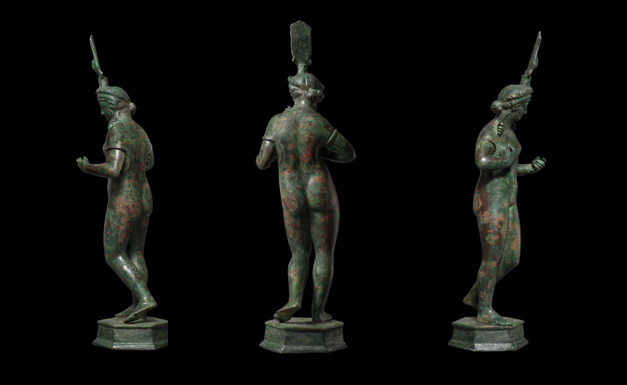 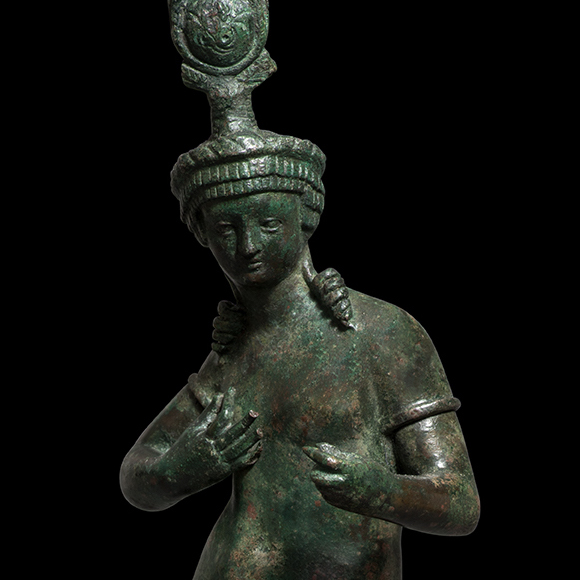