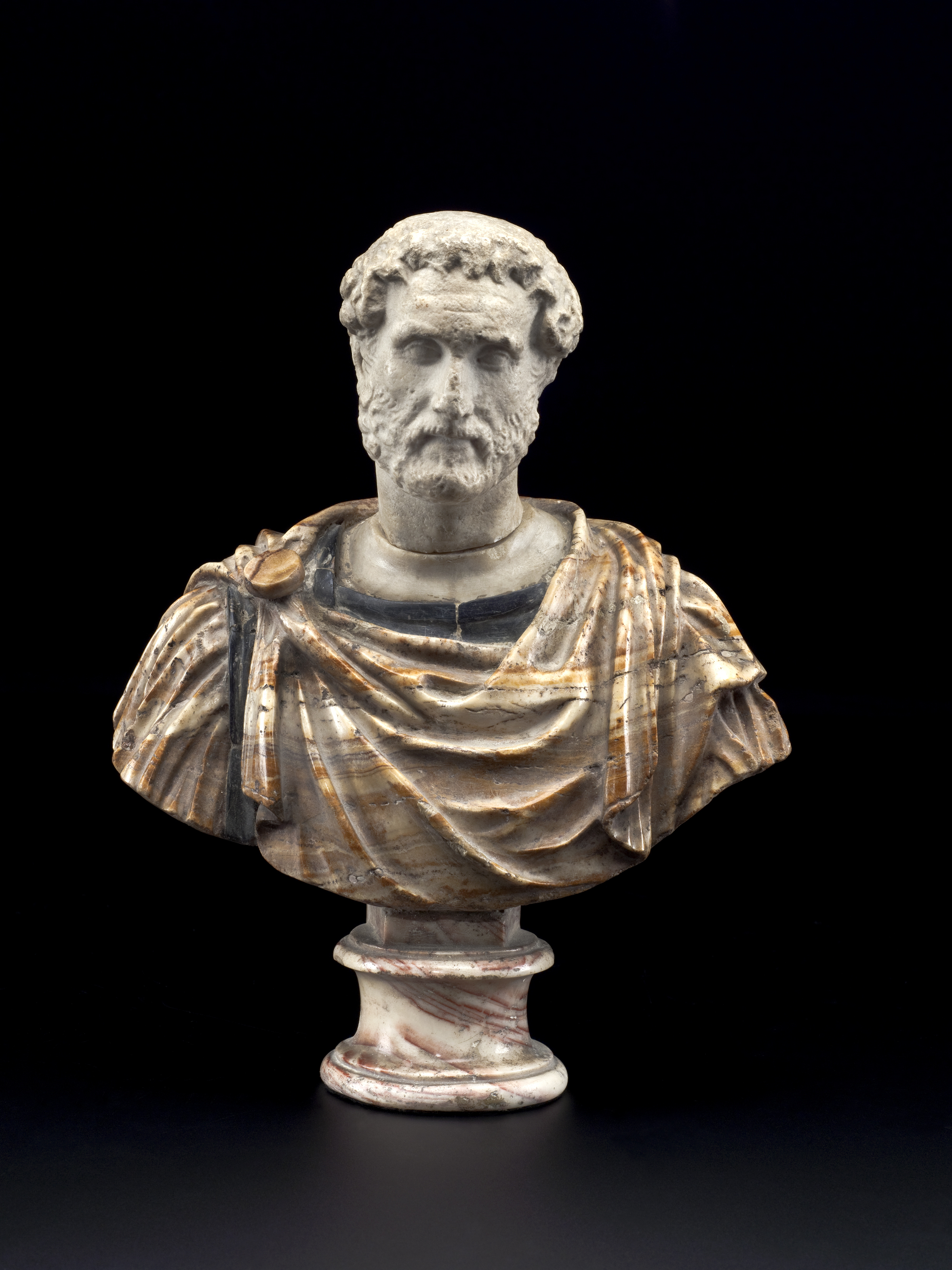 Times of sadness and uncertainty; but times also of resilience and hope …

That is why, to resume my Object of the Week, I have chosen a fine bust and a fine example to us all: Antoninus Pius, the iconic emperor of Rome who ruled for 23 years from 138 – 161AD.

Like a certain virus, we know a lot about this subject – and very little.  We know a great deal on the Emperor himself; his achievements, interests, opinions and passions. But we know very little about this bust; when was this head re-discovered? Which 17th or 18th century aesthete commissioned the lavish marble frame of yellow drapery, bordered with a solid black fringe and set on a red and white socle, on which this ancient, and to me, wistful, head was placed? Whose mantlepiece or hallway has it adorned in the ensuing centuries? Whilst these are questions we may or may not answer with time, what we can do is reflect on the life of one of Rome's greatest emperors.

Antoninus Pius was one of the five ‘Good Emperors’,. Unlike many of his [in]famous successors, he possessed a mild-mannered nature and was a skilled, capable ruler. By standards both modern and ancient, one could consider him the epitome of a cosmopolitan Roman; his family came from Gaul, his wife was Spanish and he himself was governor of the province of Asia before he succeeded his adoptive father Hadrian as emperor. Unlike his permanently itinerant predecessor however, he travelled little after he came to power; and ruled, competently, from Italy.

During Antoninus Pius’ reign, Rome reached its acme of peace and prosperity, and as such his list of achievements is plentiful but not grand. I would have thought that this is the sign of a good, humble man and a job well done - though perhaps the longest-lasting legacy of his time in the purple was in response to a rebellion in Roman-occupied Britain.

Hadrian had built a wall stretching the width of England, close to what was to become the Scottish border. Antoninus Pius attempted to extend Roman influence northwards, but was met by  formidable resistance. This forced him to consolidate his power and build a garrisoned wall 100 miles north of Hadrian’s. The so-called Antonine Wall stretched a whopping 37 miles (58 km) from the Firth of Clyde to that of Forth. But the indigenous peoples (and I say this with patriotic overtones, as I’m sure many of you know of my own Scottish heritage) were not to be kept out. Antoninus’ wall acted as a barrier for the northern limit of the empire for only 20 years before it had to be abandoned, the Roman occupiers retreating south again. Hurrah! (Incidentally, you’ll find many artefacts from the Antonine Wall in Glasgow’s Hunterian Museum – like Antoninus, a paradigm of its kind.)

I’ll leave you with five facts about Antoninus Pius that you can bring into conversation next time he is mentioned.

1. He was so frugal that people nicknamed him the ‘cumin splitter’,.
2. He was the first ruler to command all judges to adopt the notion of ‘innocent until proven guilty’.
3. He didn’t leave Italy once during his reign.
4. He was responsible for the first diplomatic mission from Rome to China.
5. He died from fever, allegedly brought on by a particularly large helping of ‘alpine cheese’.